Pokemon Emerald is definitely one of the all-time favorites in the series. That’s why a lot of ROM hacks like Pokemon Blazing Emerald are released based on the game. Players love Emerald so much that they want to experience it in a lot of different ways.

And this is where The Blazing Emerald comes in…

In terms of story, it is still the same as Emerald. But in terms of features, this is where the added changes come into play. All in all, the game looks the same but with some minor changes.

For example, you’ll notice some Pokemons have additional details displayed — especially the special ones. Plus, you have a lot more to deal with in this ROM hack.

Pokemon Blazing Emerald’s story is the same as Emerald. You start off in your Pokemon Adventure fighting trainers, Gym Leaders, and hopefully become the Champion. Don’t forget about the threat of Team Magma or Aqua and the important plot points in Emerald. Basically, if you’ve played Emerald over and over, then nothing has been changed.

It does start you off with three starters namely Pikachu, Eevee, and Clefairy. If you’re also craving for a challenge, you’ll be happy to know that the in-game AI has been improved… but not to a point where it is more challenging. 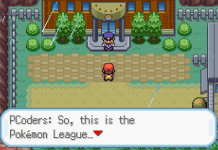 does this have gen 8 Pokémon