PokemonCoders
Home How To How to Fix Pokemon GO Unable to Authenticate, Please Try Again Error

Pokemon GO is still a great game today despite not having as many players as it once did. That being said, there are still some minor bugs and technical problems with the game.

Niantic does an excellent job to balance the game and add more content as well as minimize problems. It still has the basic issues like your GPS or network having different errors. There is also the error where it is unable to authenticate.

It could be something like a failed login attempt or something else. You can’t play the game since your account won’t be entered. Make sure as well your internet is turned on and your GPS. Then again most of the time the error would be just you not connecting to the game or the GPS error.

However, these could also be factors, but you always turn them on before you play anyway. There are a couple of reasons as to why that is, and you can always fix them with ease.

What causes the failure to authenticate and how to fix them 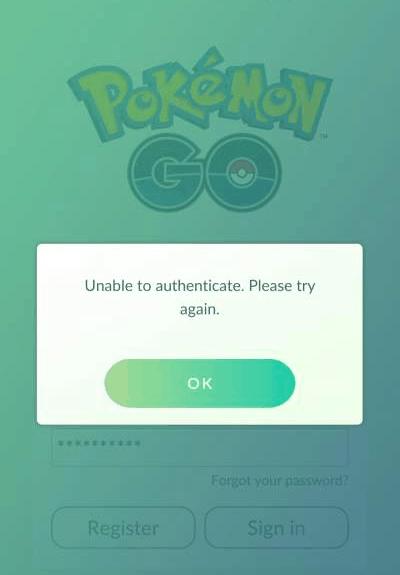 If the servers are fine, then the problem could be your internet. If the internet is so slow then chances are it will fail to authenticate your account hence you won’t be able to log in. Try to find a stronger internet connection, and it is better to be connected to the game because it will just lag and not so much having authentication issues.

One thing you can do is to clear the data. This first step clears any previous accounts and data that were saved on the game. When this happens, you log in your account again to see if the problem persists. One other thing people do is to uninstall the app. Then they download the app again and log in their account. It can be tedious but part of the problem is that during the download process, something went wrong. Even though the game loads normally, there could have been some problems along the way.

The device could also be a factor

If the servers, internet, and your account are fine, then it could be your device. Pokemon GO is not a demanding game, but chances are the game may not be compatible with your device. You could update or upgrade your operating system without getting a new device. The most you can do is to buy a new device altogether. You can try to log in your account to a similar device and it if does login then the device is the problem. If that is the case, then buy a new and better device.

Pokemon GO’s unable to authenticate problem isn’t that severe. You even do the old restart or reboot style to get the game going again. Just wait if the servers are down because there’s nothing you can pretty much do about it anyway. Do all of these things in case you’re having the Pokemon GO authentication problems to get you back in the game.